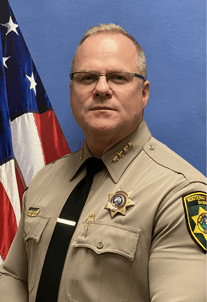 Undersheriff Nelson comes from a family of public servants.  His wife Michele retired from the Riverside County Sheriff’s Department as a Detective after 22 years of service and both his father and uncle retired respectively after 30 year law enforcement careers.  Together, Michele and Brett are the proud parents of two daughters and a son.   Undersheriff Nelson is proud to serve the men and women of the Sheriff’s Office and the citizens of Kootenai County.